Five municipalities will participate in the seventh edition of the national eco initiative, Old Paper For New Book. Bourgas Haskovo, Sofia, Russe, and Veliko Turnovo will host the campaign, which allows children to find out more about recycling, to learn how to protect the environment and to collect waste separately. Each child, accompanied by an adult, who brings in 5 kg of paper for recycling will receive a new children’s book of their choice, as well as gifts from the event partners. The organizers from ECOPACK Bulgaria and Greenwich Book Centerstress that the more paper the children hand over, the more trees will be saved from felling. 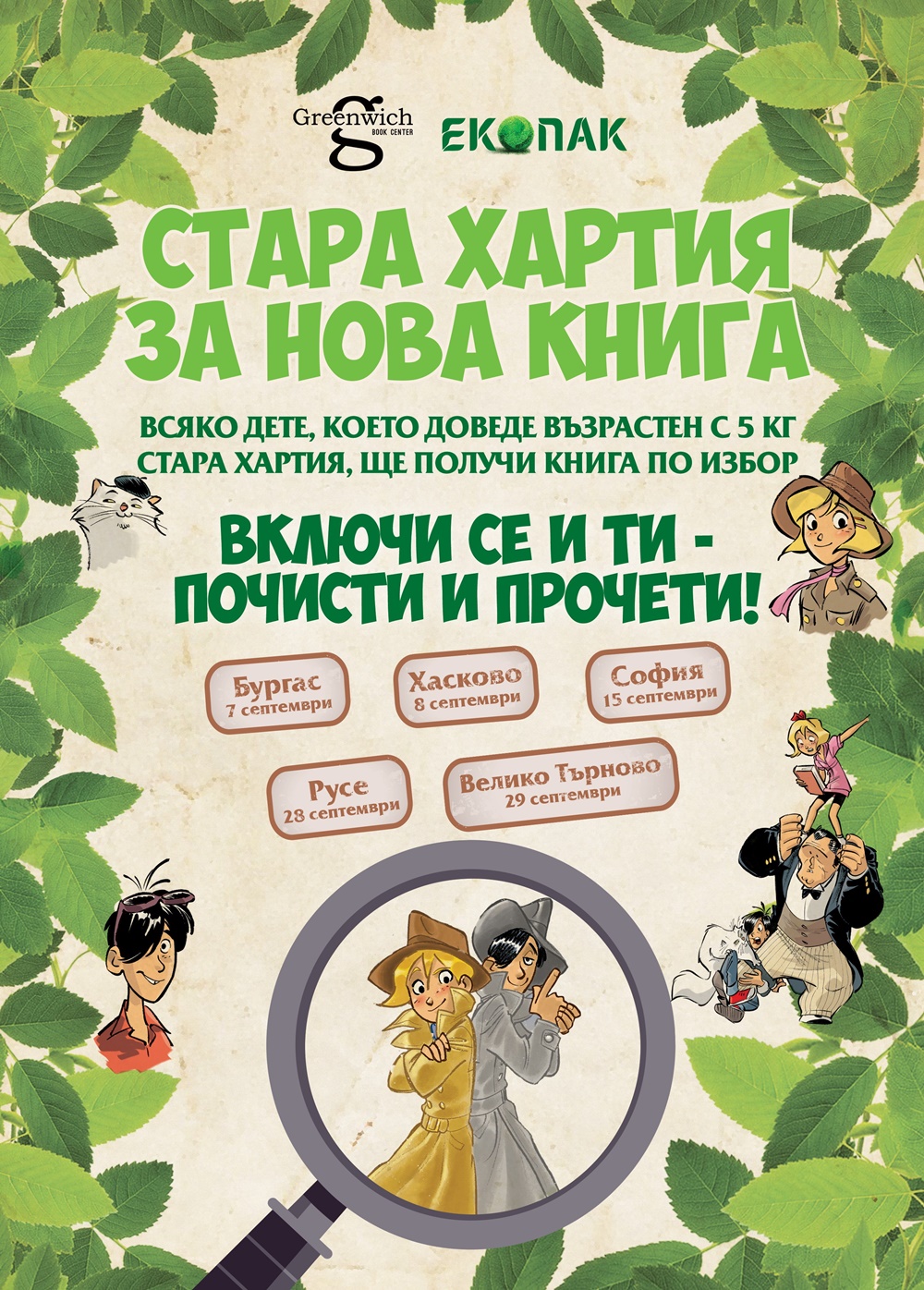 Under the motto “Clean Up and Read Up!”, the campaign will kick off in Bourgas on September 7th, from 10 am to 1 pm, in Primorski Park, in front of the Pantheon.

Haskovo welcomes the campaign on its own City Day, September 8th, from 10 am to 1 pm, on the stage in Svoboda Square.

In Sofia, by tradition, Old Paper for New Book will be held under the patronage of Mayor Yordanka Fandukova and will again be part of the 2019 Cultural Events Calendar of Sofia Municipality. The initiative will take place on September 15th, from 10 am to 7 pm, at 37, Vitosha Boulevard, in front of Greenwich Book Center.

The record holders from Russe will have the opportunity to join the event for the fifth consecutive year, on September 28th, from 10 am to 1 pm, on Svoboda Square, in front of the Justice Hall.

Veliko Turnovo makes its debut in the campaign on September 29th, from 10 am to 1 pm, in Marno Pole Park, main entrance.

The events in all of the cities will take place with the cooperation of the municipalities and the regional libraries.

By tradition, each campaign has a special literary mascot from a popular children’s book. This year the kids will have fun with the detectives Agatha and Larry – the characters from the popular series by Steve Stevenson, published in Bulgarian by Fyut Publishing House, one of the main sponsors of the cause.

But those are not the only surprises that the organizers have in store for the participants. In addition to much singing, dancing, theater and games with prizes, a giant interactive book will give kids a chance to become fairy tale characters. They will join the adventures of Stoyan and his friends, will help the fish called Toni to sing its fish song, and will clean up the lake. And in order to find out how the story ends, the kids will have to win the book “To Catch an Island” by answering questions in two special quiz competitions. Both works have been created as part of a graduation project by a student at the National Art Academy and will be presented by ECOPACK Bulgaria.

To make sure everyone who hands over 5 kg of paper is rewarded, prizes are limited to one per person. The children who bring in an additional 5 kg will receive a second book on an eco topic – one of the two special ECOPACK Bulgaria publications: Green Teen and You Can Save the Planet. Thus, in the course of the festive event, each child can receive a maximum of two books. The funds raised from the paper collected in all five cities will be used for new editions of the two books.

The “Old Paper for New Book” cause dates back to September 2013.  It is the goal of the organizers from ECOPACK Bulgaria and Greenwich Book Center to motivate children from the earliest possible age to learn to take care of nature, to collect waste separately, and to develop a taste for reading and books. Over the six years of the campaign it has been joined by a total of 37,540 young participants. With the help of their parents, the children have collected 195.5 t of paper for recycling and have received in return 42,470 new books. In this way, we have jointly saved from felling 2,548 trees. Since 2015, the initiative has grown into a national one and has been held in the cities of Haskovo, Plovdiv, Bourgas, Varna, Russe, and Pleven.

Let us all help save nature together and encourage our children to read!

The partners to the Old Paper for New Book campaign include the publishing houses Entusiast, FYUT, and the Fun Reading initiative.